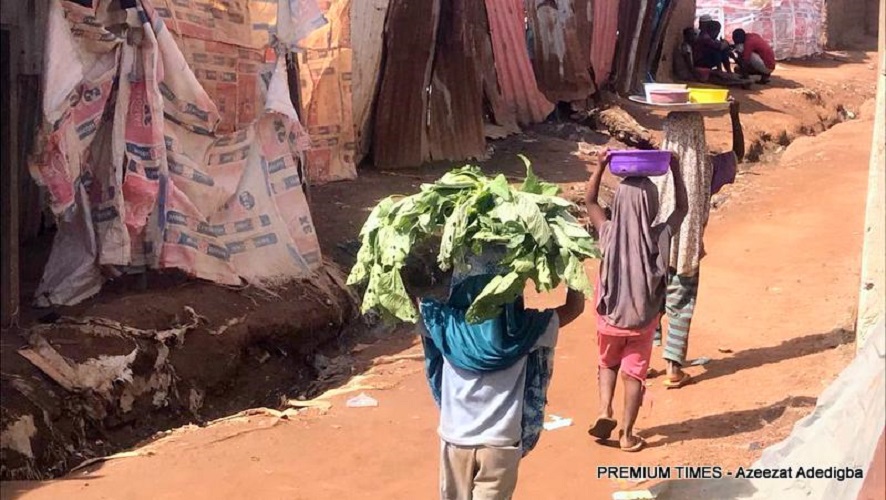 Though Nigeria will be marking this year’s Children’s Day on May 27, the country still grapples with the challenge of millions of out-of-school children.

Nigeria has an estimated 13.2 million out-of-school children, the highest in the world.

Even in the Federal Capital Territory, Nigeria’s seat of power, children in many communities do not have access to basic education.

From Damagaza, Wassa, ‘Malaysian garden’, Kabin Mangoro to Chaji, PREMIUM TIMES visited many communities during school hours to ascertain if children were in school or not. This reporter also interviewed many parents who refused to send their wards to school.

In Damagaza, three children, Marakisya Alhassan, Amara Lawan and Sadia Isa, were seen with wares balanced on their heads, calling attention to their products: vegetable, tomatoes and onions.

The trio, who are six-year-old each, live in Hausawa village in Damagaza community, a suburb in Abuja.

The trio told PREMIUM TIMES in Hausa why they were not in school.

“We have never been to school. We sell wares for our parents,” Marakisya said.

Just about the same hour, six-year-old Salome, a nursery one pupil of L.E.A primary school, Damagaza, was seen on the streets, though not with wares. She was headed to school.

Clutched in her hands was a notebook as she grinned from ear to ear. She told the reporter her house was just a stone throw from where her school is located.

But unlike Salome, 300 others, who are of school age as the trio above, are estimated to be out of school in the community. Most of their parents say they lack resources to send them to school.

The three are also part of the 27.2 per cent of children of primary school age who are out of school in the North-central region of Nigeria, according to a UNICEF study.

Statistics from the study also showed that about 13 per cent of children who are of school age are out of school in the FCT.

There is an even more worrisome statistics from the study: “13.2 million children of school age are said to be out of school, and 60 per cent of that number are girls, many of who enrol in school but drop out along the line.”

The budgetary allocation to the education sector in Nigeria is lower than the 15 to 20 per cent recommended by the United Nations. The global organisation recommended the budgetary benchmark to enable nations adequately cater to rising education demands.

Since 2015, the allocation to education has been below eight per cent.

The education minister, Adamu Adamu, who has complained about low budgetary allocation to education, recently apologised for his inability to reduce the number of out-of-school children during his tenure.

‘Poverty keeping children out of school’

For most kids in Angwan Hausawa, another community visited, there is little or no chance for any of them attending school.

Their parents do not believe basic education is compulsory and that there is a penalty attached to not sending one’s kids to school.

One of such is Hafsat Ibrahim, mother of five children, who said sending her kids to a formal school ”is too expensive.”

“I started living here in 2014. All my children are in an Islamic school because it is cheaper than sending them to (Western school),” she said with the air of confidence.

Her case is akin to that of most communities PREMIUM TIMES visited in the Nigerian capital.

While some of the children are forced into marriages, some end up on the streets where they sell all sorts of goods.

Baria Lawal, a mother of seven who has none of her children in school, said “sending children to school is too expensive, all I want is help because I cannot afford it.”

It is the same for Fatima Muhammed who, at 30, has given birth to four children — but not even one is attending school.

“My husband is a mai-guard (security guard), and we have four children, we cannot send them to school,” she said.

Many of the parents who spoke with PREMIUM TIMES in Wassa community had similar lamentations.

They lamented they are still struggling to eat and cannot afford school fees for the children.

A visit to Kabin Mangoro, another community in Kuje area council, showed a similar tale.

When PREMIUM TIMES arrived in the area during school hours, many children were seen playing around the village.

One of them, nine-year-old Shafa Abdullahi said, “I also want to wear the uniform and go to school.”

Her mother told the reporter: “I am in my second husband’s house. Shafa is not in school because her father is not here, but she attends Islamiya. Her 15-year-old sister, Nafisat is getting married in three months, she also attends Islamiya, and she met her husband there.”

Speaking on behalf of some of the parents, an Islamiya (Arabic school) teacher, Lawal Umar, said most of the kids who are not in school in the community, are orphans.

“The children are displaced, and they are staying with relatives. Most families are still struggling with feeding, let alone paying school fees. A child pays N200 monthly for Islamiya education.”

Meanwhile, the head-teacher of L.E.A Kabin Mangoro primary school, Wakil Musa, blamed the poor turnout in schools on the low literacy level in the community.

The village head of Kabin Mangoro, Yinusa Kabir, said the children in the community need some ‘incentives’ such as the ongoing school feeding programme that would encourage their parents to send them to school.

“By the time government extends their school feeding and scholarship scheme here, I know it will increase enrolment. The major problem of my people is hunger. Once they know there will be food in school, they will push their children to school.”

However, Aniah Luka, a resident of the community, spoke of how she does her best to see that four of her children go to school despite the fact that her husband has been incapacitated for over three years.

She said she sells wood to keep her children in school.

According to her, “I enter the bush myself, cut the trees down with engine and load it in a truck. I sell between N16,000 and N24,000. My husband has been lying on a sick bed for over three years, and I have been taking care of the family. The only person who is not in school is my last child, no money for her yet.”

Like Mrs Luka, Mero Jeremiah is also in the firewood business and has most of her children in school.

She, however, said her seven-year-old daughter, Sati, has never been to school and would have to wait for her siblings to finish.

One of the major legislation guiding education in Nigeria is the Universal Basic Education (UBE) Act, enacted in 2004 by the Olusegun Obasanjo administration. The act provides for free education for children up to secondary school level.

It spells jail term of one month for the first conviction and of two years or N5,000 upon second conviction for defaulting parents.

Despite the millions of out-of-school children, however, no parent has been convicted.

The UBEC spokesperson, Blossom Ossom, declined commenting on the report.

Also, the personal assistant to the UBEC executive secretary, Suleiman Modibo, did not respond to text messages and calls sent to him.

This reporter also sent a message to the official email address of the commission. There was no reply.

The chairman of displaced persons in Angwan Hausawa, Umar Muhammed, said the issue of out-of-school children ”is beyond poverty level but that of sustainability.”

“Even when we get help and donors to register the kids in school, the parents cannot continue paying the fees. Some of my people prefer to send the males to school because the girls help in hawking and bring money home while majority are willing once help comes,” he said.

Mr Muhammed, who said he had gathered the names and house numbers of children who are of school age but not in school, took PREMIUM TIMES round some of the houses.

“I have two wives and 15 children under my roof and all are in school. Even when people come around to help us to send our children to school, some parents tell me not to include their wards name,” he added.

The secretary of the community, Kabiru Bala, harped on the need for continued sensitisation on the relevance of education. According to him, the major occupation in the community is farming, ”and most parents do not understand the need for their children to go to school.”

“We have been in this settlement for 15 years, two months after they chased us from where we were before. When we have not eaten, how do we pay school fees?” he said.

‘UBEC act is the problem’

“That act that says education is free is our major problem in Nigeria. The act is causing lots of problems. If the government does not remove the act, we will still be having issues of children not being in school,” the FCT PTA chairman, Usman Abubakar, said.

He said most parents are reluctant to pay ”because the act is saying education is free.”

“I don’t think any school will be in existence today without the PTA because government alone cannot fund schools 100 per cent. So we assist them with teachers and materials. We pay teachers too; we have over 200 PTA teachers in FCT.

“Parents need to be sensitised; parents should attend PTA meetings and inform the school about the orphans so we can assist. And the highest any school in FCT can charge for PTA levy is N1000. Any school which charges above that will be sanctioned and disciplined,” he said.

The director, Universal Basic Education Board, FCT, Adamu Noma, said, in line with the UBE Act of 2004, ”the provision of basic educational services in the FCT is free.”

“In the FCT, the provision of free basic education is borne by the government in support for the parents. So, the parents support through the PTA. The slogan for Universal Basic Education Act is ‘Education for all is the responsibility of all’. So everybody will have to put his hands on deck to make sure that the provision of educational services to the child is made completely free.”

He attributed the increasing number of out-of-school children in the FCT to the influx of immigrants from other states.

“Our problem in the FCT is that people move into FCT daily. You are moving pupils out of the street, more pupils are coming in. Some of them come as child beggars, they are aiding their parents. Some come on their own, some are even sponsored beggars, child beggars by some people.”

Mr Noma said the lack of adequate funding is also a major challenge.

Benedicta Ngozi Apeh is one who is very passionate and enthusiastic about what she does and sets her heart to do. She is a self-motivated, resourceful, dynamic team player with the ability to also work independently. A writer whose desire is to change, encourage, nurture and impact lives by her pen and one who always looks forward to the attainment of success and fulfillment in her chosen career through continuous learning and harnessing of all available opportunities for growth.
Post Views: 583

Benedicta Ngozi Apeh is one who is very passionate and enthusiastic about what she does and sets her heart to do. She is a self-motivated, resourceful, dynamic team player with the ability to also work independently. A writer whose desire is to change, encourage, nurture and impact lives by her pen and one who always looks forward to the attainment of success and fulfillment in her chosen career through continuous learning and harnessing of all available opportunities for growth.