THE IMPACT OF SCHOOL CLOSURE ON NIGERIA’s EDUCATIONAL SYSTEM 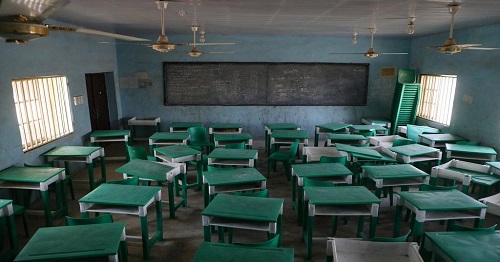 In this year alone according to the report by UNICEF, “there has been 20 attacks on schools in Nigeria with more than 1, 400 children abducted and 16 dead”.

Many Nigerians believe that the endless trend of kidnapping of school children going on in Nigeria, and particularly in the Northern part of the country is not politically innocent — it is politically engendered. Others are also of the opinion that the government of Nigeria is not ignorant of the cause of the wicked act, nor is she ignorant of the very cure that can stop it. Everyone around the world is in the know that Nigeria security agencies are by no means the weakest in the world though Nigerians are known to be brave, smart, creative, wise, and intelligent.

Regardless of these assumptions and the image Nigeria as a nation is accorded around the world, the activities of banditry seem to have been adopted as professional practice within her territory without minding the damage it has done, and it is doing to the educational system, including all our beautiful educational polices. The impact of this wicked act on the nation’s education, and the facilities of the nation leaves a lasting damage. Definitely, we might not see it now, but it is a matter of time, the reality will stare us in our faces — it is not possible to have an action without a reaction.

Time after time, the government of Nigeria, Federal and State government, roll out millions of Naira to pay ramsons to kidnappers for the freedom of her citizens, especially the school children. But the question on the lips of everybody is, should the government continue to pay ramsons to kidnappers, will this evil act stop one day? The attack on Nigeria education is a sever battle that if the Nigerian government do not do everything possible to put an end to it, we might stand the chance of losing our future and the future of this great nation to ignorance and underdeveloped minds. Education is the building block of national development. We can’t shy away from it and not end up in total ruin. Our education is our future, our education is our growth, our education is our development.

The battle line has been drawn to peg the destiny of Nigeria and render her a perpetual depending nation on the economy of other nations of the world. Apart from the definite shift in the resumption date of schools within the Federal Capital Tertiary (FCT), education and school activities in both Kaduna and Zamfara States that are closed down indefinitely, Network providers within the two states are being directed to short down operations for two weeks, “To enable relevant security agencies to carry out required activities towards addressing the security challenge in the states”, the Nigerian Communication Commission said in a letter.

The impact of concurrent actions of bandits on Nigeria education in general, and particularly on the states which school activities are closed for the time being is a serious setback on teaching and learning. Functional education is equal to functional growth and development, while the lack of it is equivalent to lack of growth and development. The human mind has a stage that is adaptable to functional development; easy period for knowledge assimilation naturally. When the mind in such a window period is put on hold from feeding on information: learning and training; for the number of time or period it is put on hold, it will take equivalent steps backward.

More so, poor learning has the ability to breed habitual malpractice of processes. Take for instance, children who are supposed to resume SS 3 classes, who are also expected to be learning at school and preparing gradually for their both internal and external exams like WAEC, NECO, or UME, have been deprived of the privilege to learn due to lack of conducive environment for learning. When it is time to write their exams, the students are expected to pass, and parents will not desire that their children repeat classes so they can match up with their counterpart in other states. And since passing is all that matters to both students and parents, including schools, exam malpractice will become the only option for students to engage in which will only lead to a greater fall in the value and quality of education regardless of A1’s and B1’s that are scored on paper.

The closure of schools in Kaduna State and Zamfara State will result in an uneven implementation of education polices in the country. While the rest of the states are profiting from the polices of education in Nigeria; even if the resources are equally distributed to all the states of the federation, the allocation for education within the affected states during the close down period will either be misappropriated, or diverted to other units, or looted and cornered into private pockets. And such acts will only result in creating gaps between the actual unutilized resources on education in the two states compared to the actual utilized resources nationwide.

Another negative impact of this incidence if allowed to persist over time is that, it will cause a serious setback on students’ progress. The students who are supposed to be promoted to higher classes in this term will remain at same point, while their mates in other parts of the country will be expecting to move to other classes by this time in 2022.

Uneven distribution of quality of turnover students. There is a popular saying that says, “It is not how far but how well”. It is not enough to go to school; it is much more about what or the task that anyone can handle having gone through school. It is quite unfortunate that education has become a matter of what is on paper; paper qualification, and not on what (responsibility, problems) the bearer of the certificate can handle. People no longer study to solve problems but to cause problems.

Apart from passing examination, education should be about using knowledge that is gained to solve existing or new problems. But the reverse is the case, students must graduate, parents are not ready for stories; they have paid school fees for the term or session, they mustn’t be asked to repay it. Schools also are not ready to downplay their income; teachers must be paid to remain on duty in the school, so affected schools in this closedown will be ready to rush out their students even if it means to just write exams and go; as long as that will balance their school’s calendar with other schools and other states, no one cares. But it is students that will suffer the consequences of not having the opportunity to be taken through the required curriculum for each term or session which will in turn result to poor quality of graduates in Nigeria economy, who will eventually become burdens to the nation.

Other possible negative effects of the activities of bandits on education which has forced over one million students out of school in some parts of Nigeria (source: UNICEF), would result in the growth in the number of school dropouts. Some students could become fed up of the situation and completely abandon education to face other means of seeking survival. This would lead to increase in crime rate across the nation due to idleness. “The idle mind they say, is devil’s workshop”.

In the same vein, this incidence is capable of causing over concentration of population in the urban cities in Nigeria. For instance, FCT is one of the most secured places in Nigeria due to the security architecture of the place, and it is a land for all. Many of the rich parents within the affected states would prefer to spend any amount to get their children enrolled in schools in the FCT, instead of waiting to have them remain at home indefinitely. This will lead to more problems created in the cities. And it will also bring about more stress on already stressed facilities in urban areas particularly FCT.

Conclusively, education is the future of every nation of the world. Any nation that plays with her educational system, certainly, is waiting to keep depending on importation of both essential goods, essential services, and luxury goods and services; for the survival of her citizens. The bandits that have come amidst us are enemies of all; everything it requires should be done or engaged by the government and stakeholders to ensure there is favorable learning environment for all again.