SAFE EDUCATION FOR ALL: A HUMAN RIGHT 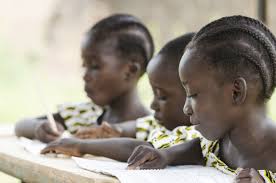 It is one thing to have rights as a child written down in gold, but it is another thing for the child, the sole beneficiary of the right and privilege, to be aware of what has been written, for him or her to enjoy. Of course, no matter how much in number the rights and privileges of a child are, as long as such a child is ignorant of what are rightly his’ or hers’, such a child is as good as not having any right at all. This reality is a malady and menace for all.

Many children across the world are not aware of the content of the volumes of the book that spells out their rights and privileges to education as the core responsibility of the state or government to them, in ensuring that there is an enabled environment for their studying and learning which must be free from all forms of possible threat to their lives and learning infrastructures. And these provisions must be accessible to all children regardless of their locations, colors, language differences, backgrounds, intelligence, religions, and cultural differences, for it to be measurable.

The best way to make a child stand up to the demands of his or her right to education in a situation when his right is deprived him, or there is a breach of his freedom to conducive learning environment is by making the child informed, aware of his or her human rights and conditions. Making the child aware of his human rights and privileges will give him the consciousness that it is not a thing of favour when he is given access to education, and on the other hand, it is not an illegal act when he is making a demand or asking that such rights and privileges be made available to him either at the national, state, or grassroot levels.

The government has deformed or mal-informed the masses, and has made the people believe or think that whatever they are able to get from the government is more like a favour — that ought not to be so. If the government is sincere at every tier; be it national, state, or local level; then she should make the child realize that, yes, access to quality education is not a favour the government is trying to do him/her, but a delivery of government’s responsibility to her citizen as stipulated by the constitution. This will make the child to know when and where this right is breached or threatened, and where and when to place a demand on an erring government to do to him what is his right regardless of who is in power or political authority.

When the rights of people are abused, definitely, it is a question of time — like we see in Nigeria today —lawlessness will abound. (When leaders play games and politics with the nation’s education, they will indirectly breed hooligans and bandits who will one day carry guns and cutlasses to chase learners out of schools and become threats to learning, lives, and properties — schools’ infrastructures.) A breach on an aspect of a constitution either on the part of the government or stakeholders will lead to the breaking down of other aspects of same constitution either by the government or the people.

The major cause of the insecurity challenges facing the nations of the world today particularly the third-world countries amidst the global pandemic (COVID 19) is not far fetch. You can’t play with fire and cry when you are burnt by the same fire you decided to play with. Education as a matter of concern has been neglected by many leaders over the years due to corruption and greediness. What is meant for all has been hijacked by the few as if the people committed a grievous sin to vote them to power. What then do you expect, if people don’t go to school to learn values for lives, values for national resources, and value for national peace and unity; won’t they definitely be engaged in where they can learn to become criminals?

Education is great tool for solving societal issues; disunity, unrest, and underutilization of resources. But the government has neglected the provision of an enabling environment for the people to learn, develop, and contribute positively to their nation. So, the people have learnt lawlessness and crime instead.

The threat to lives and education,  security challenges, and the several abuses of the government on human rights, and child’s right to productive and life transforming education; what can we do, what should be done, or what is expected of the government, or what must we do as stakeholders or as an individual?

It is better to be done lately than for it not to be done at all. The core message of the international human rights law is the enjoyment of all human rights by all regardless of age, colour, background, economic capacity, language, or cultural differences. And one of such human rights is the of a child to fruitful education. And this responsibility is placed on national leaders of each member states or countries to ensure that justice is given to all such that the law does not only exist on paper or document, but it is enforced and monitored in all levels of governances within a respective nation.

To begin with, government and necessary stakeholders should endeavor to make the people aware of their right to education: it is not a favour to provide education for the people but a responsibility of the government to them. And the government must ensure the flexibility of the process, or she should make sure the template she will use is monitored for effective delivery of this right to each child for maximum impact; the process of execution must not be void of the 4As as developed by the UN: the right to education of a child should be available, accessible, acceptable, and adaptable.

COVID 19 has done more harm to education globally than any natural disaster or violence has done since the second world war. Disease is a great threat to human right to education. No matter how adaptable or accessible the opportunity to learn is made available to sick children, no learning could productively take place when there is threat to live. Both the government and non-governmental bodies will have to sit-up in the fight to put a permanent end to the global pandemic that has sent many out of various learning institutions across the world.

It is true that no nation of the world can rise above its educational level. But when a nation is taking it lightly with enemies of education, particularly with set of bandits and kidnapers and destroyers of learning institutional technology; burning down and vandalization of learning infrastructures, building and other materials, kidnapping of school children, and killing of both teachers and learners, such nation is taking her destiny for play.

When security issue remains a challenge to a nation’s education such nation sincerely has got everything to worry about because it is like a sharp axe chopping the root of a tree. It is a matter of time; the tree will soon be brought down.

Insecurity issues are things that must be dealt with to the root cause without leaving any stone unturned. Any nation that finds it hard to overcome it should voice out and seek international aid to cure herself of every possible threat to education, and free her people from the agony of threat to lives and learning. It is evil and it is capable of destroying the legacy and future of any nation economically and otherwise. If insecurity succeeds in preventing quality education of a nation, such evil will rob the nation of fruitful future.

In summary, the essence of functional education is to build and transform a people who will in turn becomes agents of national builders generally in the long run. When the people are underdeveloped, the nation will be underdeveloped. The government of each nation within the United Nations should ensure that the right of every child to education is available, accessible, acceptable, and adaptable for all without discrimination against any child.