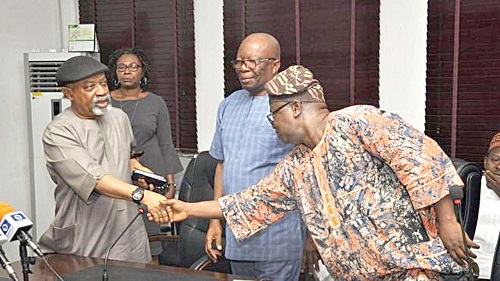 July 2, 2021 Flickers of Hope 0 Comments
• Withheld salaries used to blackmail our members to enroll in IPPIS, says Osodeke
Academic activities in the nation’s universities may again be paralysed as members of the Academic Staff Union Of Nigeria Universities (ASUU) warned of a fresh strike over alleged refusal of the Accountant General of the Federation (AGF) to pay salaries and remit check-off dues of about 1000 staff for 13 months.Chairman, University of Jos branch of ASUU, Dr. Lazarus Maigoro, accused the AGF of allegedly causing friction between the union and Federal Government, which may trigger another round of strike.

ASUU President, Prof Emmanuel Osodeke, said despite its promise to the union to pay all outstanding salaries before December 31, 2020, government is still owing members in many of the branches between two to 16 months salaries.

Osodeke alleged that government is withholding members’ salaries to force them to enroll for Integrated Personnel and Payroll Information System (IPPIS).

He said: “There are lecturers that are paid for few months, after one or two months, they stopped paying them, and all sorts of funny things. We have met with the minister of labour and employment; we even cascaded it to the Office of the Chief of Staff to the President, but the office of the AGF seems to be adamant on punishing members.

On the next line of action, the ASUU chief said there are procedure for embarking on strike and the union will follow that procedure.”

Asked if the union had made any attempt to meet with officials from the office of the AGF, Osodeke said: “We have our principle of engagement with government. The agreement we reached in December was brokered by the Minister of Labour and Employment, and we also agreed to meet from time to time to look at the issues. We met in May and raised all these issues with the Accountant-General’s Office present at the meeting.

“They tried to deny the fact that some of our members are being owed. And we were able to prove with available data that they were lying and they accepted and agreed to implement. If any of our members enroll in IPPIS today, officials from the office of the AGF will pay you the next day, which means that what they are doing is deliberate.

“We have sent data of our members to them more than four to five times – complete data. They will request for one today we will send, and the next month our members will still not be paid. But if any of our members decides to register, they will pay all their arrears. It is a deliberate attempt.

“They even came last month to request for data and we sent to them. As we speak, more than 1000 of our members are still being owed 16 months. Bursars of each university have sent their documentation and all corrections to the office of the Accountant-General, yet they are not paying our members,” Osodeke added.

He alleged that the officials are trying to blackmail ASUU members, using hunger as a weapon to get them to enroll on IPPIS. “It is very unfortunate that they are trying to kill the university system because of personal reasons, and I think it is wrong. We will meet, get reports from all our branches, get all available data and the union will take the next action.”

The nation’s universities were shut for nine months following a prolonged strike by ASUU over unresolved issues with the Federal Government, particularly on IPPIS and payment of Earned Academic Allowances and revitalisation of tertiary institutions.

According to Maigoro, the AGF is insisting that lecturers must go to Abuja and register for IPPIS despite the intervention of President Muhammadu Buhari.

On alleged non-remittance of check-off dues by the AGF, the ASUU boss said it is a deliberate attempt at preventing the union from assisting members whose salaries were withheld, in a bid to force them to register for IPPIS.

“This we believe is also aimed at deliberately frustrating the implementation of the University Transparency and Accountability Solution (UTAS), the payment platform developed by ASUU.

He said the union has got to a stage where it may be forced to take drastic measures to save the lives and families of its members.

“We call on all well- meaning Nigerians to advise those responsible that this path will force us to take very drastic measures. Invariably, it is the children of all Nigerians in these institutions that would suffer and not just ASUU members.

MEANWHILE, the Senior Staff Association of Nigeria Universities (SSANU), has advised the Federal Government to withdraw its circular directing that workers of Staff Schools should not be captured in the 2022 budget.

SSANU President, Mohammed Ibrahim, warned that the union would embark on industrial action if government fails to heed the union’s request.

Ibrahim, who spoke against the backdrop of alleged circular from the Budget Office directing that teachers in Staff Schools should be removed from the Consolidated Salary Scale (CONTISS) in the 2022 budget, said revisiting the matter, which had been decided by the National Industrial Court, would affect the industrial harmony being enjoyed in the universities.

He said if government should go ahead to implement the directive, over 3,000 of its members would be affected. Haruna accused government of going against the agreement it reached with the union, even when the court had given a judgment on the matter.

“We discovered that the Federal Government, through the budget office, had directed that universities should remove names of members who teach in the university demonstration schools, meaning that they would not be captured in the CONTISS salary table, while government is planning to put them on a different salary scale, Consolidated Public Service Salary Scale (CONPISS).

“This is a negation of our agreement with government, because members in university demonstration schools are bonafide members of university staff. They have their employment letters signed by registrars of various universities, as approved by councils under the terms and conditions of engagement. Unfortunately, government is trying to create another friction.

”If government is planning to stop funding, personnel costs of teachers in the university demonstration schools, it should be from the new employments being made, but not those already employed and signed contract with,” he said.

Flickers of Hope is a Non-Governmental Organization with a primary focus on Education. We aim to educate, mentor, empower and equip young people, as beacons of hope for the nation.
Post Views: 601