The implications of Out-of-School Children 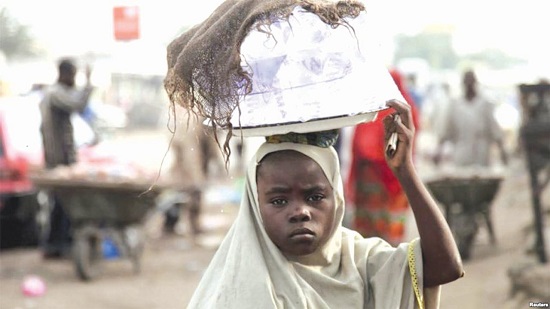 That the authorities at all levels in the country are debating the number of out-of-school children in the country without strategy to deal with the reproach at this time speaks volumes about the importance they attach to education. It is heart breaking for Africa’s most populous nation.

Although, the problem of out-of-school children (OOSC) is global, Nigeria’s share should not be newsworthy. UNESCO Institute for Statistics (UIS 2014), stated that worldwide nearly 58 million children of primary school age were not enrolled in school in 2012, despite global initiatives dedicated to achieving universal basic education (UBE).

Among these world’s OOSC, over two-thirds are in South and West Asia and Sub-Saharan Africa. However, based on recent statistics, it appears that Nigeria carries close to 20 per cent of the global burden.

Recently, Hamid Bobboyi, the Executive Secretary, Universal Basic Education Commission (UBEC), said the number of out-of-school children increased from 10.5 million to 13.2 million between 2010 and 2015. This is contrasting to a figure given by the Minister of Education, Mallam Adamu Adamu, in January, when he disclosed that the number of out-of-school children (OOSC) in the country dropped from 10.5 million to 8.6 million in the last three years.

According to the Minister, “When President Buhari came into power in 2015, UNICEF said out-of-school children in Nigeria was about 10.5 million. But I want to tell Nigerians that with the effort of this president, especially with the school feeding programme, it dropped from 10.5 million to 8.6 million as at last year.

While, the data may vary, they point to the fact that a bleak future awaits Nigeria, unless the issue of OOSC is addressed because there is a link between education and development. According to Nelson Mandela, “An educated, enlightened and informed population is one of the surest ways of promoting the health of a democracy.” Essentially, education is a leveller, makes citizens to have choices, strengthens the office of the citizen, and develops critical minds needed to question duty bearers and bring them to account, which is essential for social justice.

So, of what use is borrowing money to invest in infrastructure, without building the minds that will use them patriotically? Essentially, untrained children will filter away the nation’s wealth.

In looking for the way forward, it is essential to look at some of the causes of OOSC in Nigeria? In finding solutions, experts diagnosed the problems leading to OOSC and attribute the persistence in Sub-Saharan Africa to a variety of supply and demand side barriers. It has been argued that children’s poor access to education may be occasioned by inadequate number of qualified teachers, materials and schools, particularly for children in remote areas, children living with disabilities, children in IDP camps and ethno-linguistic minorities. On the demand side, they opine that poor demand for education leading to exclusion from school may be driven by misperceptions about the benefits of schooling, ignorance that UBE is free in public schools; poor quality of education; or misconceptions about education, such as Boko Haram that sees western education as ‘evil,’ which has heightened the issue in the Northeast.

Similarly, the perception that education is not empowering; and that going to school does not make one successful or prosperous, has found expression in the gendered nature of OOSC in the Southeast. So, there is the spatial dimension to OOSC in Nigeria. Furthermore, it has been alleged that poor border control is leading to influx of children from neighbouring countries, which may account for the high number of OOSC in Nigeria.

Although, there have been attempts to address the issue of OOSC through the school feeding programme by the current Federal Government and the Almajari School by the previous administration to capture them in motion; various states and local governments have been using interventions to promote children education. For instance, the administration of Governor Emmanuel Uduaghan, changed the face of education in Delta State through some educational policies and one of such policies is the Delta Education Marshals (DEM), which has been replicated in some states of the federation. Unarguably, the DEM policy was formulated by the state government then to eradicate ‘street culture’ in the state by bringing about ‘learning culture.’ The educational policy was mooted to support the development of education-related learning in young people of school age in the state. The Delta State EduMarshals were given specific mandates, which include the detection and prevention of truancy among students; the apprehension of school age child hawking or selling in stores or shops during school hours; maintenance of school hours surveillance and arrest, detention and investigation and/or returning or registering any person of school age found outside school premises during school hours.

Other functions of the EduMarshals are the provision of intelligence information to relevant ministries, police and stakeholders on any matters relating to a child; to make a child under 18 years of age to attend school or learn a trade (skills acquisition); to ensure that the streets of Delta State are free of children during school hours.

Similarly, there is the Osun State Education Marshalls, constituted to help curb all forms of indiscipline and moral decadence among pupils and staff of public schools in the State. The Oyo State government variant codenamed “Education Monitoring Marshals” was introduced to raise more disciplined school children as the special task force is empowered to arrest and discipline students caught wandering out of school premises during school hours, aimed at changing students attitude positively towards learning. In a related development, Governor Aminu Waziri Tambuwal of Sokoto State while flagging off an advocacy campaign to boost school enrolment for the eastern part of the state in Durbawa village of Wurno Local Government Area, warned that parents in the state will now face appropriate sanctions in accordance with the laws of the state for refusing to send their children to school.

Furthermore, some state governments have developed a culture of continuously improving the quality of education from primary to tertiary levels through the provision of state-of-the-art infrastructural facilities, capacity building for teachers and many other programmes to promote effective teaching and learning in the schools. This is encouraging.

So, at the moment in Nigeria and across various levels of government, it is obvious that enrolling OOSC is now seen not only a moral and legal obligation but a productive investment that is worthwhile. Besides, it is being given attention in line with the 2003 Child Rights Act, which recognises access to basic education as part of the rights of a child.

So, no amount of money is too much to invest in children’s education; and there is no single measure to drive demand for children school enrolment. The solution lies in multi-level interventions and investments in primary education. Therefore, people holding trust for Nigerians should rise up to the occasion.

Relevant ministries, departments and agencies (MDAs), should be constructive and use a strategic approach to enlighten local leaders about the value of education. They should deconstruct the perception that education is not empowering, and that going to school does not make one successful or prosperous. Similarly, they should sensitise parents particularly, the rural and non-literate parents that UBE is free, because most of them do not know.

All told, birth registration linked to national identity card should be used to address the influx of children from neighbouring countries. So, immigration officials should properly document children entering through various borders by taking their details to track where they are going and their length of stay in the country.

Flickers of Hope is a Non-Governmental Organization with a primary focus on Education. We aim to educate, mentor, empower and equip young people, as beacons of hope for the nation.
Post Views: 1,239

Tags: #Out of School Children