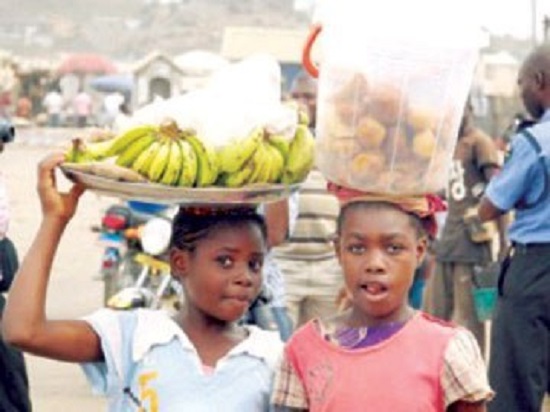 Ekiti State Governor, Dr Kayode Fayemi, has warned that henceforth, government will arrest parents of pupils found hawking during school hours; stressing that parents must take advantage of the free education policy of his government to reduce the number of out-of-school children.

Speaking in Ado Ekiti at an Education Stakeholders’ meeting at the Conference Hall of the Governor’s office in Ado-Ekiti on Friday, the Governor said all hands must be on deck to checkmate the declining school enrolment rate in the State so that the State’s slogan- ‘Fountain of Knowledge’ does not become an exaggeration.

Governor Fayemi, had shortly after his inauguration last year October declared free education from primary school to senior secondary school in the state and abolished all education levies and the education tax introduced by the immediate past administration in the state.

He lamented at the meeting, which was well attended by all stakeholders in the education sector, that many parents were yet to take full advantage of the free and qualitative education policy of the administration, adding that part of the responsibilities of government is to ensure that children and youth- who are the future of the nation- were properly groomed through qualitative education that will prepare them for the future.

The Governor said the current school enrolment rate of 55 per cent as against 96 per cent recorded in 2014 was unacceptable to his government, adding that something must be done urgently to reverse the ugly trend.

According to a statement by the Chief Press Secretary to the Governor, Mr Yinka Oyebode, Dr Fayemi also disclosed that government has started compiling the records of retired teachers, with a view to determining available vacancies in the teaching service.

He added that his administration will soon commence recruitment of competent and qualified teachers who will help to raise the standard of education in the State.

The Governor also disclosed that the administration had commenced the process of returning mission schools to their original owners, but stressed that government would continue to monitor them to ensure that the schools do not decline in standard.

Representative of the State chapter of the National Association of Proprietors of Private Schools, Mr Babatunde Abegunde, said the abrogation of education levies had taken off the burden of debts of school fees from parents; adding that many parents could not afford to pay their children’s school fees as salaries were not regular.

Abegunde urged Governor Fayemi to look into issues of multiple taxations in the education sector, which according to him, had hindered many school owners from undertaking infrastructure development in their schools.

In his remarks, the chairman of the State chapter of the Parent-Teacher-Association (PTA), Chief Adeola Osadare, lauded Governor Fayemi for paying the 2019 WAEC fee of about 14,000 students in the public schools across the State.

Osadare said the gesture will help many students who had dropped out of school to re-enrol, as there is hope of free school certificate examination registration under Fayemi’s watch.

Other stakeholders such as the chairman of the Nigerian Union of Teachers, Mr Samuel Olugbesan also thanked the Governor for prioritizing the welfare of teachers.

Olugbesan declared the second coming of Fayemi has been a huge blessing to teachers because “things that directly affect teachers are being addressed and given priority attention by the Governor”.