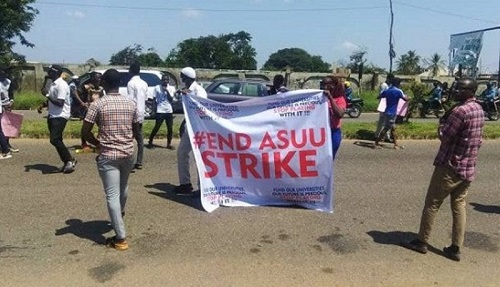 The National Executive Council, NEC, meeting of the Academic Staff Union of Universities, ASUU, will hold on Monday next week to decide on the offers by the Federal Government for it to end its ongoing strike.

The meeting promises to be a decisive one and may determine whether the government would axe the union as being contemplated.

This is just as a member of the NEC told Vanguard in confidence that whatever would be the decision of the union, would be in the best interest of the university system.

However, when contacted, the National President of ASUU, Prof. Emmanuel Osodeke, said his union was yet to officially get any offer from the government’s side.

“We have been negotiating with them through collective bargaining and whatever they have should not be made to us on the pages of newspapers. It should be done the way it is expected to be done. Our main problem with the government is that there is trust deficit. They will say something and will do another thing.

“After the Memorandum of Action was signed last year with them, they were supposed to pay some money in two tranches starting from August last year, but they did not do the needful.

As for other unions suspending their actions, ASUU is not a one man show, we will look collectively at whatever is presented to us. But as at now, nothing has been officially offered,” he said.

However, checks by Vanguard revealed that the coming NEC meeting could lead to the FG coming down hard on the union if it decides to continue with the strike.

Recall that the union has been on strike since February 14 and three weeks ago, extended it for another four weeks that would terminate next Monday.

Non-teaching staff, under the aegis of the Senior Staff Association of Nigerian Universities, SSANU and the Non-Academic Staff Union of Educational and Allied Institutions, NASU, have already suspended their industrial actions and are set to resume work Wednesday this week.

Also, the National Association of Academic Technologists, NAAT, is holding its NEC meeting this Thursday and would also suspend its action, leaving ASUU as the only university staff union still on strike.

This is just as parents, under the aegis of the National Parents Teachers Association of Nigeria, NAPTAN, have called on ASUU to take the offers by the government first, while pending issues are being addressed.

The National President, Alhaji Haruna Danjuma, in a chat with our correspondent on Monday, said though the expectations of the striking workers might not be fully met, it is better to have something to hold on to than having nothing.

“I have got information about what the government is offering, regarding salaries and payment of allowances. As our children have been at home for all this while, their future is of essence. The Briggs Committee proposed higher salary, in the region of over one million naira monthly for a professor, but what is being offered is short of that. The truth is that all the sides cannot get everything they want.

“We are losing lecturers to other nations, while valuable time is wasted on strike. There will always be a mid course to take and my suggestion is that ASUU should take the offers first while other issues are being sorted out,” he counselled.

Vanguard reported on Monday that the FG is ready to release money to revitalise the universities, pay Earned Academic Allowance and also jerk up the salaries of the workers a bit.

It is hoped that the union would accept the offers and avoid being proscribed as being contemplated.