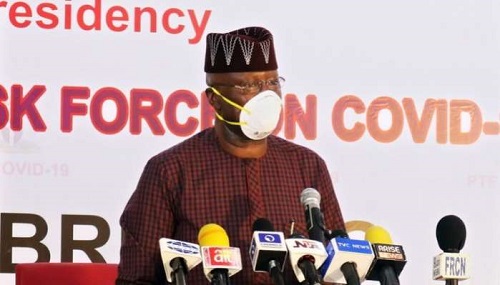 Secretary to the Government of the Federation (SGF), Boss Mustapha, has said incessant attacks on schools especially in the North East has put pressure on the country’s fragile educational system.

Mustapha, who was a special guest at a peace walk against incessant invasion and kidnapping of students, organised by the Peace Corps of Nigeria, PCN, in partnership with the African Union (AU), in Abuja, vowed that Government would not pander to the demands of bandits.

The Director of the Nigeria National Volunteer Services in the OSGF, Mrs Olusola Aina, representing Mustapha, remarked that “the rise in insecurity in schools puts pressure on an already fragile educational system.

‘As a direct consequence of the insecurity in schools, dozens of schools have been closed in the Northern part of the country. These school closures are in addition to schools that were already closed down for years because of the Boko Haram insurgency.

‘The sustained and repressive attacks by way of invasion, killings, pillaging, kidnapping for ransom and rape by bandits on educational institutions, especially secondary schools in parts of the Country, which is getting to its peak, deserves the immediate attention and action by all relevant institutions of government, social organisations and people of goodwill to address headlong.

‘It is through our collective commitments on how all and sundry can come together and form a strong bond against banditry under any guise in our institutions of learning that we can win the war against further invasion of our schools and kidnapping of our students.

‘Historically, the kidnappers vis-à-vis the bandits focused their attack on the elites, captains of industry and political office holders in the name of ventilating their anger and frustrations.

‘But now, redirecting their attention on innocent youths and students, being soft targets, is to say the least an act taken too far and this calls for drastic measures to be emplaced if the war against banditry is to be won.

‘At this juncture, permit me to restate that, statistically, from Chibok to Jangede and lately Federal College of Forestry Mechanisation, Mando, Kaduna, 1,179 students have been abducted in seven years with some of them either killed, forcefully married away, maimed or remained traumatised even after regaining freedom.

‘The banditry and the attendant horror being visited on our schools, if not urgently addressed frankly and frontally, will not only instil psychological fear on the students but capable of creating a disconnect in our educational system, with grievous implications on national development.

‘It is therefore in view of the need to address this existential threat to Peace and Security in Nigeria and its social consequences on the nation that we have decided to organise this event in order to draw national consciousness to this menace with a view to mobilise both state and non-state actors to collectively come together with the sole aim of protecting, securing and safeguarding our institutions of learning from further attacks by the marauding bandits.

‘I consider it pertinent to state that the students being kidnapped, maimed, raped or killed may not be our biological children, brothers or sisters but they unarguably remain the hopes and future of our dear nation.

‘It is on this note that I appeal dispassionately to the conscience, regardless of our social, ethnic, religious or political affiliations to rise in unison against the sustained, horrendous and murderous act of terrorism in our institutions of learning,’ he said.