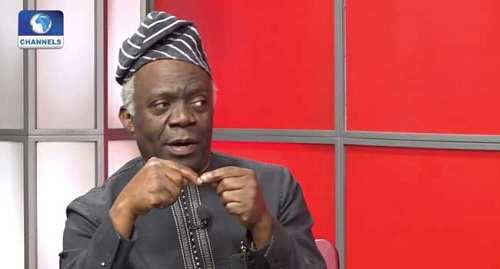 Senior AdvocateIn the circumstance, we are compelled to call on President Buhari to end the industrial action by directing the Minister of Education, Mr. Adamu Adamu to execute the Renegotiated Agreement. The Agreement should be executed as soon as possible in the public interest.” of Nigeria, Femi Falana, has once again spoken up about the lingering strike by the Academic Staff Union of Universities (ASUU).

In a statement on Thursday, he ramped up his push for the Federal Government to take action to meet the demands of the striking lecturers and end the industrial action which started on February 14.

Less than 72 hours after he called on the Federal Government to submit a supplementary budget to appropriate N200 billion to revamp federal universities across the country, Falana is calling on the government to sign the renegotiated agreement with the union.

“Based on our consultation with the leadership of ASUU, we have confirmed that the entire members of ASUU are fully prepared to call off the strike as soon as the FG/ASUU Renegotiated Agreement is executed by the Federal Government,” said Falana, who is also the interim Chair of Alliance on Surviving Covid 19 and Beyond (ASCAB).

Falana detailed how the agreement was renegotiated and faulted the Minister of Labour and Employment for the delay in moving forward with it.

He said, “It is public knowledge that the Federal Government inaugurated the Renegotiation Committee headed by Professor Munzali Jubrin in December 2020.

“The Committee was saddled with the sole responsibility of addressing the demand of the Academic Staff Union of Universities (ASUU) pertaining to the task of revamping all federal universities in the country.

“After extensive consultations with all the relevant stakeholders, the Committee completed the national (assignment and) submitted a comprehensive report to the Federal Government in May 2021.

“Regrettably, the Agreement was not signed by the Federal Government 9 months after the submission of the said report. Hence, ASUU embarked on the current industrial action.”

He lamented that the strike has lasted for almost five months due to “the dissatisfaction of the Federal Government with certain aspects of the report of the Jibrin Renegotiate Committee”.

He continued, “Instead of ironing out the grey areas in the agreement the Federal Government turned round to set up another Renegotiated Committee under the leadership of Professor Nimi Briggs in March 2022.

The Committee has also submitted its report to the Federal Government. Even though the Federal government and the ASUU have reached an understanding to call off the ongoing strike based on the execution of the report of the Briggs Committee, the Minister of Labour and Productivity, Dr. Chris Ngige, has announced the purported rejection of the report.”

According to Falana, available information shows the Federal Government has not authorised the Minister to reject the agreement and subject ASUU to a campaign of calumny.

“The implication of rejecting the report of the Briggs Renegotiated Committee is that the ASUU strike will continue indefinitely,” he said.

He noted that President Muhammadu Buhari had recently expressed concern over the strike and called on ASUU to call it off saying that”enough is enough.

According to him, it would take the execution of the agreement for the union to heed the call.