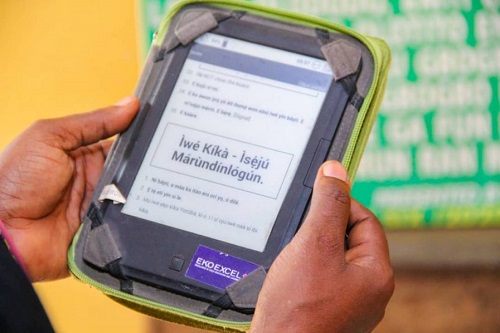 The Lagos State Universal Basic Education Board’s (LASUBEB) EKOEXCEL says it will continue to encourage the use of the mother tongue as a medium of instruction and uphold excellence as the gold standard of all its operations.

Speaking on the celebration and how the mother language can further help its drive for inclusion and ensure that no child is left behind, LASUBEB’s Executive Chairman, Hon. Wahab Alawiye-King said teachers under the scheme are not rigid but use the mother tongue to aid pupils’ understanding whenever necessary.

He explained that though EKOEXCEL is technology-driven with several English language learning and instruction tools, it embraces the mother tongue because it is the foundation of learning.

“The Ife Six-Year Primary project of the late Professor Aliu Babatunde Fafunwa confirmed that a child learned best in their mother tongue. Drawing from that landmark study, our teachers also use their mother tongue.
“Besides, some pupils struggle with the English language because of their backgrounds, so apart from our teachers using the mother tongue, we also have instructional and learning tools in Yoruba. We don’t want to produce pupils grounded in Western cultures and languages but know nothing about theirs. This is why we continue to use our mother tongues, particularly Yoruba, in EKOEXCEL schools.”

The Permanent Board Member of LASUBEB and oversight chair of the EKOEXCEL programme, Hon. Adebayo Adefuye also explained that technology has a role in advancing multilingual education and supporting the development of quality teaching and learning.

“In this novel initiative wholeheartedly supported by Governor Babajide Sanwo-Olu, we are using technology to address teaching and learning challenges and to promote inclusion, ensuring that no child in Lagos State is left behind. Importantly, the Yoruba language plays a crucial role in our teaching and learning activities,” he said.

The UNESCO General Conference approved the International Mother Language Day in 1999. The first edition was observed globally in 2000.

Since its launch in 2019 by Governor Babajide Sanwo-Olu to provide quality education to and upskill teachers leveraging technology, EKOEXCEL has recorded significant achievements.

It has moved over 18,000 headteachers and teachers from analogue to digital teaching, using tablets and an updated curriculum. EKOEXCEL has also enhanced the teacher-pupil interaction experience through technology (eLearning) in Lagos State primary schools.

Other impacts of EKOEXCEL include a drastic reduction in the number of out-of-school children in the state, taking several of them out of harm’s way on the streets and enrolling them in schools through the ‘Leave No Child Behind’ policy.

There’s also a continuous enrolment exercise across local governments and council development areas to enlighten parents and guardians on the importance of sending their children and wards to school.