Moral Decadence: Why Education is Vital 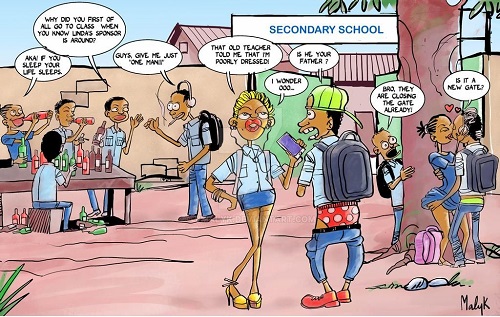 Looking at the society, we see so much going on around us. The principles we held so dear back in the day is no longer regarded by these young ones. Lots of peer pressure and influence on our young ones is stronger than what existed in the past. The media is not even taking it easy on them as there are a number of programs that model indecent acts and immorality. Many young ones now want to be like and do what the older ones do in the media not minding its possibilities; they see them as role models and are always ready to imitate them. Mobile phones and internet isn’t a luxury any longer, since they can have access to it any time they require, and the immoral behaviours of others is not far-fetched on accessing the internet. This has been a great concern to many as the moral standard of a lot of young ones are way below average. It leaves us to wonder what exactly is going on, whose responsibility is it to get the morality of the young ones back and how it all affects us as a society.

Decadence is a state of deterioration or decay, especially due to being excessively morally corrupt or self indulgent. And we see this play out so well in the lives of many youths now. Youths of nowadays are more self indulgent than otherwise, always with the desire to gratify their own appetite and desires; allowing themselves to do anything that they enjoy; since they are all desire freedom and some level of independence.

Moral decadence however, is the process of behaving in a way that shows low moral standards. It means gross reduction in the moral values in a particular society (Muraino and Ugwumba 2014). Morality is collectively upholding of certain beliefs, idea, values and behaviours, rules and regulations which are considered good, right and acceptable by the society and to which members of the society are bound. It’s quite disheartening that we do not see these values and beliefs being upheld amongst others.

Moral decadence as seen in the lives of young ones could be in the form of rape, cultism, examination malpractice, teenage pregnancy, student prostitution, sexual harassment, sale of grade, drug abuse, indecent dressing among the young ones. We no longer see the competitive drive to do more among students, the love for academic excellence has dissipated too quickly and the gratification of self, showcasing possessions have become the order of the day. One key thing that was in existence back in the day was the desire to be academically and morally relevant; however, caution has been thrown to the air now. Students now go along in their own desires and many aren’t even interested in going to school. We now find ourselves in a society where the young ones believe there is no need to go school since they can see their so called role model ‘doing well’ as a drop out.
Some of the causes of moral decadence range from poor upbringing, to media, broken homes, influence of peer group, moral laxity in schools. These eventually result in the adverse effect of poor academic results of students if moral decadence is not checked. Also, this is the reason for the high rate in school dropout around especially when there is an instance of teenage pregnancy; there will always be some form of break in the academic performance of such student.

Children learn a lot from their parents, caregivers, peers and media. This is why parents need to strengthen the moral behaviour of their children through love so they have no reason to look outside for it, engaging in external force thereby. Parents also have a larger role to play in this, as they have the most influence on the children being the very first contact to morality and particularly influence. As parents, do you watch what your children view on the media? How mindful and watchful are you to the junks that go in their mind. Many parents even watch SVL rated movies with their children without blinking. Are you that kind of parent that care less and you just believe they can take care of themselves? If you are, please change and take responsibility as the future and moral health of these ones are largely in your own hands as well. A parent, who fails to take responsibility now, will also feel the brunt later as the child becomes a pain in the society.

Some of the key ways to reduce the immorality amongst young ones and also correct it; for those that have been negatively impacted, asides adequate home training is counselling for students, engaging in more moral education, orientation seminars as extracurricular activities to get them ‘re orientated’ in the right values. Parents, caregivers, peers and the media need to consciously model the good and guide them aright; because they all play vital roles in the lives of these ones. This is one key reason FOH engages in Value Orientation for young people, reorientating them in the values that have been lost hitherto. So, we don’t lose our dear ones to the decadence in the society out rightly.

Proper education not just formal also informal that impacts value and morals cannot be over emphasized. Through proper education and guidance, the present and upcoming generation can retrace their steps, gain the right knowledge to uphold high moral standards, have good judgment of wrong and right, be selective in their choices of role models, and seek for lasting impact rather than immediate gain.