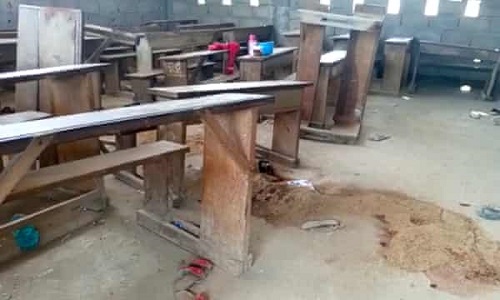 It is saddening to hear again that about 300 students of Government Girls Secondary School, Jangebe, Zamfara State, had just been kidnapped. This is coming barely a week or more after 42 students and staff were kidnapped from a school in Niger State, Kagara to be precise. It is absolutely unthinkable that a serious government would allow all these attacks and kidnapping of innocent school students to continue unabated. Ever since the story of Chibok Girls in 2014 in which 276 girls were kidnapped from their dormitory in Borno State, Northeast Nigeria by Boko Haram and subsequent incidents of the same nature, it appears the Nigerian government at all levels still have not seen the need to embrace the Safe Schools Initiative (SSI).

Many Northern States in Nigeria for example are lagging behind in education compared with other regions in the country. A number of factors have been adjudged to be responsible for this and chief among them is the issue of insecurity. In the north-eastern parts of Nigeria alone, Boko Haram onslaught since 2009 has resulted in the deaths of many people and thousands fleeing their homes. Their attacks mostly were on military installations and religious worship centers at the onset of their operations, but they gradually moved towards educational institutions in the latter years. Their attacks on educational institutions could have been borne out of the fact that Boko Haram means “Western Education is Forbidden.”

Since their attention towards disrupting the educational system of the North, school buildings have been attacked, teaching materials have been destroyed, staff and students have been abducted of which many are still unaccounted for till date. Of all the 276 students of Chibok Girls abducted in 2014 for example, about 112 are still missing. Leah Sharibu of the Dapchi Girls of 2017 is still in Boko Haram captivity, Kagara boys, about 27 in number, abducted and still missing. Because of their incessant attacks on school facilities, a Borno SUBEB report estimated that about 253,000 children were out of school in the 2013/2014 school year alone. You can only imagine what that number would look like today, despite Borno state’s government efforts in rejigging the state’s educational system.

How can education be attractive amidst a growing crisis of insecurity? In Nigeria alone, a Global Citizen research revealed that more than 10.5 million children are not going to school and this figure is mostly in the North. According to UNICEF, one in every five of the world’s out-of-school children is in Nigeria. The few that are in school are still being threatened by insecurity and kidnappings.

It is quite unfortunate that the Nigerian government is still helpless when it comes to keeping children safe in school. The original idea behind the SSI was to ensure that all schools in Nigeria are safe from attacks in the future. But ever since its launch in 2014, more schools had been attacked. The only logical conclusion from this is that the Nigerian government have failed to act with regards to keeping our schools safe and conducive enough for children to learn. When Nigeria signed up for the SSI globally, the following were the expectations:

– highlighting the incidence and impact of attacks on education in conflict and insecurity among key actors and cultivate public support for safe education,

– promoting better systems for monitoring and reporting attacks on education;

– promoting effective programmes and policies to protect education from attack, including prevention and response,

– encouraging adherence to existing international laws protecting education and the strengthening of international norms and standards as needed; and

– fighting impunity for attacks on education by promoting and supporting a range of accountability measures.

At the launch of the SSI in Nigeria in May 2014 after 276 girls were kidnapped from their school in Chibok, the following were the expectations: alternative schooling arrangements for them students in the most volatile areas at the time (Adamawa, Borno and Yobe states), the promotion of safe zones where qualify and effective education can take place, comprising of teachers, parents, police, community leaders, and young people themselves, emergency plans, communication plans, et cetera. At the launch of the initiative, a $10 million fund pledged by a coalition of Nigerian business leaders, working with the United Nations Special Envoy for Global Education, Gordon Brown, the Global Business Coalition for Education and A World at School. In the days and weeks that follow the launch, the Nigerian government committed an additional $10 million and international support from countries like United Kingdom, Norway, Germany, and the African Development Bank were registered.

A cursory look at these expectations shows that Nigeria has failed in every ramification to meet them. The challenge mostly has been: lack of political will to do, corruption in the educational sector, lack of adequate funding, socio-cultural norms, of course, on the part of the people that don’t see education as necessary tool for growth and emancipation. When Nigeria’s new government took power in 2015, many of the Safe Schools Initiatives were not seen as important and were not given the needed and necessary attention, which of course, have resulted into more kidnappings in our schools ever since this current administration came on board in 2015.

How Can Nigerian Government Keep Our Schools Safe?

There is need for the Nigerian government to be proactive in keeping our schools safe. A lot of the times, the government is seeing to be reactionary. It is not enough to put policy statements on papers, it is important that these policies are implemented and followed up to the letter. If the government at all levels (Federal, States and Local) had done what they were supposed to do since the incident of Chibok Girls in 2014, then the Dapchi Girls would not have happened, the Kankara Boys kidnap would not have happened, same goes for the Kagara boys and the current unfortunate Jangebe girls’ kidnap. All these incidents only pointed to one thing: the government isn’t doing enough (if at all they are doing anything) to keep our schools safe.

Also, the government can partner with reputable organizations in fully implementing the SSI. Many reputable Non-governmental Organizations (NGOs) are doing a lot already in the areas of education in Nigeria, especially in the areas of school enrollment, giving scholarships to indigent students in order to see them through school and so on. Government can identify such NGOs and partner with them in order to bring to bear the SSI. This would ensure that funds for the purposes of SSI are properly tracked and used for the purposes they are meant for.

It is time for the government to do something in order to prevent these incessant attacks on our schools going forward. No nation would make any meaningful progress without educating its people. Education is the key, education is important, and education is the future.