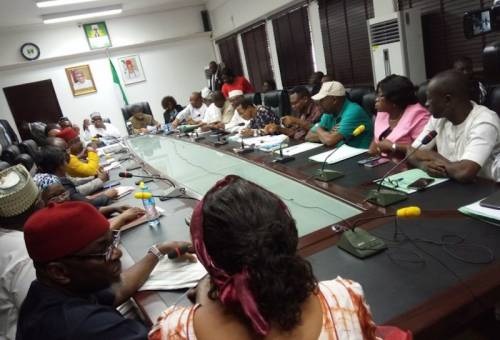 After almost eight hours of an intensive closed-door meeting on Tuesday, both the Nigerian government team and the leadership of the striking Academic Staff Union of Universities (ASUU) emerged at about 11 p.m. with an indication of possible resolution of the areas of conflict between the two parties.

The president of ASUU, Emmanuel Osodeke, declined elaborate comment on their conclusions but said his team would report to the members on the government’s proposals and later revert to the government.

But the minister of labour and employment, Chris Ngige, said both parties agreed on a lot of things, and that ASUU was expected to “talk to its members, show them the proposal that has been offered by the government so that they can call off the strike”.

Earned Academic Allowances (EAA) and revitalization fund for universities were the two items on the agenda for Tuesday’s meeting.

Mr Ngige said although most of ASUU’s demands are being dealt with, the remaining areas are also being addressed.

“Like I told you the last time, a lot of the items have been dealt with extensively and some of them are work in progress,” he said.

The minister said one of the areas remaining is the renegotiation of the 2009 FGN-ASUU agreement, noting that the ministry of education has set up a committee to look into the submitted report of Munzali Jibril-led renegotiation committee.

Mr Munzali, a professor, took over the negotiation following the resignation of the former chairman of the governing council of the University of Lagos (UNILAG), Akoka, Wale Babalakin, as the head of the government team.

He said it is important that allowances requested by ASUU are in tandem with the structure available at the National Salaries, Incomes and Wages Commission.

In six weeks, he said, the committee at the ministry of education “will round off everything and send all”.

“A new team has been set up because they needed to have a second look at that document, and make sure, with ASUU’s contribution, that some of the allowances are not against the NSIWC’s fixed salaries and allowances.

“If you do that and propose it to the government, it will not be accepted. So, it is important that they work well. So that whatever they present can be approved by the federal executive council.”

The minister said within six weeks, the committee set up at the education ministry will wrap up everything and send all. “So, that is the only new area.”

The minister also said a joint committee of ASUU members, officials of the National Information Technology Development Agency (NITDA) and independent IT experts have been given up till March 8 to come up with the report of a joint review of the University Transparency and Accountability Solution (UTAS).

He said: “They will also go there with the technical team and do a joint test on integrity and vulnerability test of UTAS. And we were hopeful that when they commence the test, they will do it and give us a joint report.

“We will also get neutral IT expert to join them. So that if they have areas of disagreement, they can resolve. The timeline is for them to conclude by March 8. We expect that we shall also work on it for six weeks.”

Mr Ngige said there was no problem with the EAA, saying if there are those that are unpaid the minister of finance “will look for the money to pay”.

He added that his ministry has reached out to the National Universities Commission (NUC) to set up a committee to come up with the computation of allowances for universities and forward it to the finance minister in the next three weeks.

Meanwhile, Mr Ngige has said the Nigerian government has so far paid over N92 billion as earned allowances and revitalisation fund to federal government-owned universities across the country.

The minister said this at the State House on Tuesday, saying the development was part of the government’s commitment to the implementation of the 2020 December agreement that was reached with the union.

He said: “Why I said that the 2020 December agreement we had with ASUU is on course in terms of implementation is that in the agreement, there is a line that says the federal government should pay ASUU and other unions N40 billion for EAA and that has been paid.

ASUU had embarked on a four-week warning strike to press home its demands including the renegotiation of the ASUU/FG 2009 agreement, sustainability of the university autonomy by deploying the University Transparency and Accountability Solution (UTAS) to replace the government’s “imposed” Integrated Personnel Payroll Information System (IPPIS).

The union has also demanded the release of the reports of visitation panels to federal universities and distortions in salary payment challenges.

Others include funding for revitalisation of public universities, earned academic allowance, poor funding of state universities and promotion arrears.

While the minister of education, Adamu Adamu, had days after the commencement of the strike constituted the white paper panel of the visitation panels, the committees are yet to be inaugurated.

After the last meeting between ASUU and the government’s delegation, Mr Ngige described the strike as illegal, saying the union did not give a 14-day notice required by law before it embarked on the strike.

In its defence, ASUU said it did not embark on a fresh strike, and that the current strike was a roll-over of its suspended strike in December, 2020.

Flickers of Hope is a Non-Governmental Organization with a primary focus on Education. We aim to educate, mentor, empower and equip young people, as beacons of hope for the nation.
Post Views: 299